If you’re one of the masses of iPhone users that’ve upgraded to the iPhone 4S in the past few weeks, you may well have been experiencing some battery issues – today we may well have the answer as to why. As we’ve seen this past week, quite a few people have had what they’ve described as less than stellar battery life with their iPhone 4S, and this weekend we’ve not only been handed a possible solution, we’ve tested it for ourselves, and what do you know, it appears very much to work: just switch your Setting Time Zone switch to off!

Inside your System Services in your Settings on your iPhone 4S, you’ve only to look down the list until you find “Setting Time Zone” and the switch beside it – flip it to OFF. What we’ve found thus far after making this switch is that standby time has gone up significantly. Inside three hours, the iPhone 4S has only used 5% of its total battery life. Sixty hours of standby, is that you? We’ll see!

The tip to make this happen to increase battery life comes from iDownload where Oliver Haslam notes that the bug likely lives inside iOS 5, not necessarily the iPhone 4S hardware. There while the Setting Time Zone appears to be tracking constantly instead of simply periodically, battery time is cut down, and down, and down. The’ve done some tests as well:

“We have tested this method on 4 different iPhone 4s handsets, including an iPhone 4 and an iPhone 3GS. All have reported drastically improved battery life after switching ‘Setting Time Zone’ off.” – Haslam

The only thing you’re losing by switching the Setting Time Zone function off is the automatic re-setting of your time if you cross the boarder into a different time zone – when you’re flying to Grandma’s house for the holidays. If you DO decide to try it out, be sure to let us know how it goes.

UPDATE: Another test on the iPhone 4S yields 80% battery after over seven hours with one and a half hours of that time in use. I think we have a winner! 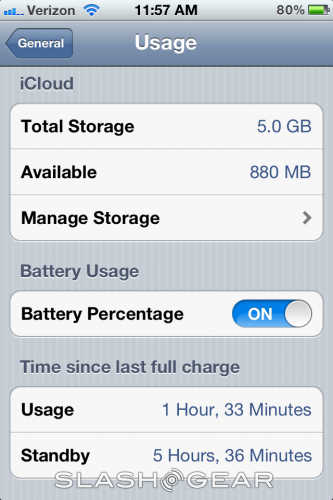