iPad 5 and iPad mini 2 surface in clearest images yet

It’s little over a week now before Apple almost certainly holds their next event for the release of the 5th generation iPad and the 2nd generation iPad mini, and today a set of images has appeared of both of these tablets’ shells, clear as day. These images give us the most high-definition look we’ve had of both pieces of hardware yet, and well before the official unveiling of the devices by Apple itself. We’re seeing here a slightly modified iPad mini 2 and a large overhaul on the iPad 5.

These devices will be home for Apple’s official big push for the iOS 7 tablet-based environment as the launch – while already out in the public – has thus far focused on the iPhone universe. With the iPhone 5s and the iPhone 5c out in stores now, Apple will likely bring in a set of features specifically aimed at the tablets being unveiled this month at least featured here at this special event.

Both the iPad mini 2 and the iPad 5 are being shown here via Sonny Dickson, suggesting that they’ve been purchased upstream through 3rd party sources and likely attained – or at least modeled – via factory worker sources within Foxcon or something similar. This neither confirms nor denies implicitly the authenticity of the parts.

The iPad mini 2 here comes in Space Gray, indicating that Apple will continue with the color scheme delivered with the iPhone 5s and almost every different kind of iPod this past month. The iPad mini 2 works with a body that’s nearly identical to the previous model, with no perfect suggestion for an upgraded front display panel. It would seem that just as many sources have come forth with information on a Retina-quality panel at this point as have sources suggesting a Retina-quality panel would have to wait for 2014.

Meanwhile it’s almost certain that the iPad mini 2 will work with an upgraded processor, likely the A6 chip provided with the iPhone 5 and iPhone 5c. This device will also quite likely take on the same pricing structure currently working with the original iPad mini. 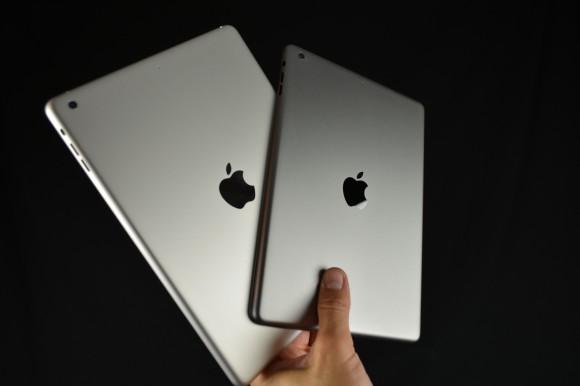 The 5th generation iPad has been suggested to be coming with an A7X chip, slightly different from the A7 chip existing in the iPhone 5s. It’s not known at the moment whether this device will also work with the M7 coprocessor delivered with the iPhone 5s, but it’s seeming more and more likely over the past several weeks that it will work with a Touch ID sensor – a fingerprint scanner on its home button, that is.

The iPad 5 works with a slightly thinner body than its predecessor and will have a much smaller bezel on the right and left of its display (when held in portrait mode). This device will take on a look much closer to that of the iPad mini and iPad mini 2, creating a much more cohesive aesthetic message for the public. Have a peek at the timeline below for more information leading up to this release, and stick around SlashGear’s Apple hub for more, right here on October 22nd!