Ah, the Apple Newton – spiritual predecessor to the iPhone and a PDA cruelly axed before its time.  It seems a surprise that we’ve had to wait so long to see an iPhone Newton case, then, but happily Charles Mangin is taking on the challenge; his iNewt project will take an expired Newton MessagePad 2000 and trim it down to perfectly wrap around an iPhone 4.

So far it seems he’s managed to hack apart one old Newton and craft a custom bay for the Apple smartphone, doing some re-logoing along the way.  A simple hatch door keeps the iPhone 4 in place, and we’re guessing there’ll be some sort of pass-through cable arrangement so as to charge and sync the handset without necessarily needing to remove it from the case.

This seems like one of those ideas that’s guaranteed to spawn various third-party cases, so if you haven’t a spare Newton of your own – or can’t bring yourself to sacrifice one to replicate Charles’ project – then you likely won’t have to wait long until commercial versions are available. 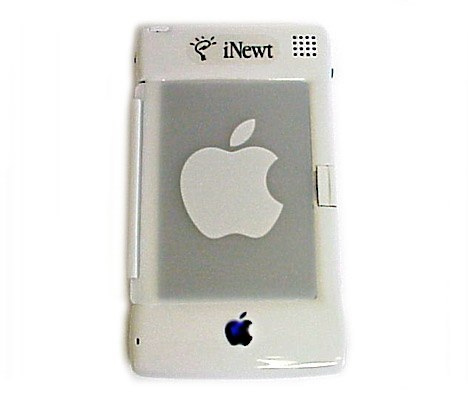