One of the most popular camera apps on iPhone is getting a huge upgrade alongside the iPhone 12 arrival, with Halide Mark II promising both greater pro-features as well as one-touch ways for everyday photographers to get better shots. The successor to Halide, the new app taps Apple’s new ProRAW on the iPhone 12 Pro and iPhone 12 Pro Max, as well as reworking the interface to better suit the new iPhone screen shape.

So, the UI pushes information up to either side of the notch, and hugs the new curves at the bottom of the display. Those with an iPhone that still has a home button – like the 2020 update to the iPhone SE – will find it easier to use one-handed, too.

The UI itself has been revamped, flipping from a pared-back interface similar to what the regular iPhone camera app uses, to a far more feature-rich one. There’s a new typeface, and you can swipe left from the edge of the screen to find a new mode switcher. The photo reviewer surfaces more metadata, among other things.

Obviously, for anyone to consider switching the camera app they use, you need to have features that the regular iPhone camera doesn’t deliver. On the one hand, there’s ProRAW support, with Halide Mark II being ProRAW-ready. However, there’s also a new Coverage feature in the app, which captures both a JPEG with all of the computational photography applied – like Smart HDR 3 and Deep Fusion – as well as a RAW file for manual editing later.

Halide’s Instant RAW feature, meanwhile, is a halfway house between in-camera JPEG and RAW. It develops a RAW file, using machine learning to carry out 17 steps around things like detail and color. “In a world where the-built in camera has its own filters,” developer Ben Sandofsky explains, “Instant RAW is a “No Filter” module. You are free to use and share the result directly, or use it as a starting point for editing, just like ProRAW.” 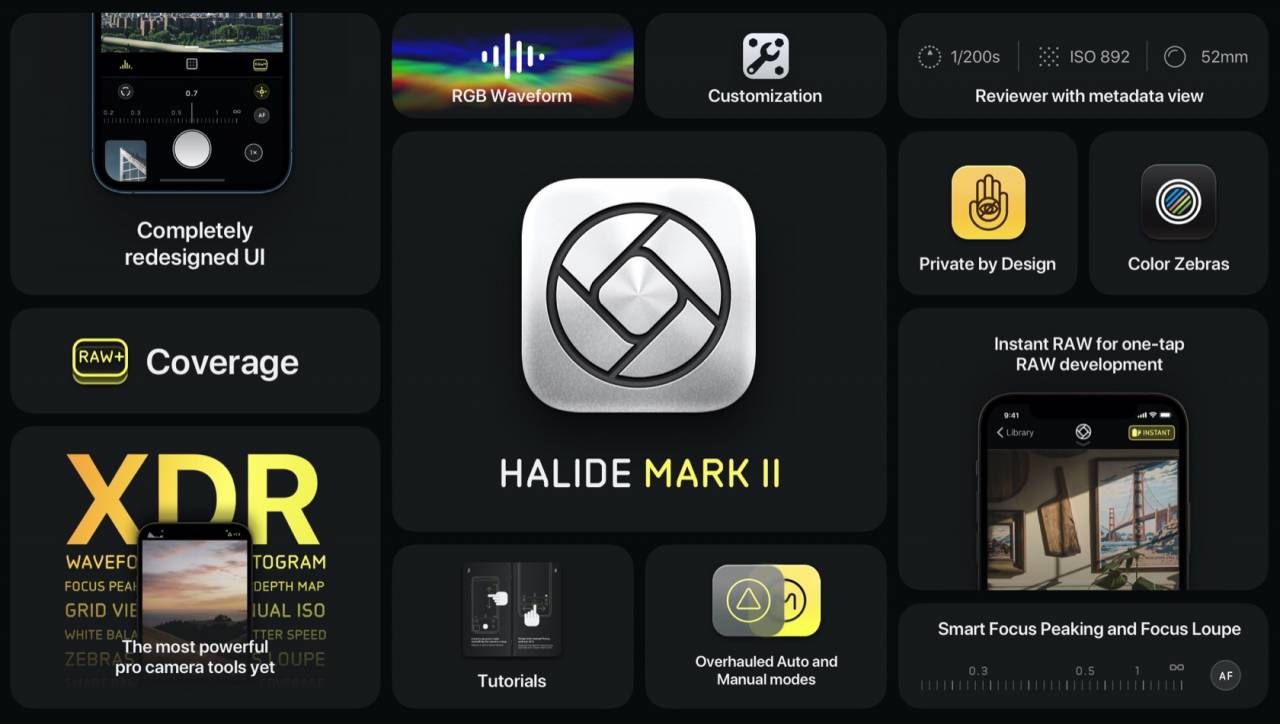 There are plenty of other reasons why Halide Mark II is worth a look, not least new focus and exposure tools, 14-bit XDR Analysis, and even a 10 day course for users wanting to get the best out of the features on offer. As for pricing, it gets a little complicated but there’s a nice surprise for anybody who used the original app.

New Halide Mark II purchases will be $30, though the company says it’s likely to increase that over time as features are added. There’s also a new subscription model – $11.99 per year, though $9.99 initially for a limited period. Existing Halide users, though, who have already paid for the app will get Halide Mark II as a free upgrade. They’ll also get a year of member’s updates.