The Google Nexus S isn’t due to arrive officially until December 16 at the earliest, but Google has been flaunting the Samsung-made Gingerbread smartphone ahead of time. We grabbed some hands-on time with the brand new flagship; check out our first-impressions and a video demo after the cut.

The Samsung DNA is hard to miss in the Nexus S, what with the glossy black plastic housing, touch-sensitive buttons and general hand-feel being so similar to what we’re used to from the Galaxy S. Still, the curved screen is new and surprisingly usable, a tactile swoop that follows the arc of your thumb as you move it down the display. Unlike the top-placement of microUSB and 3.5mm headphones socket on the Galaxy S, the Nexus S shifts them to the bottom of the handset. There’s also no microSD card slot, only 16GB of internal storage that pretends to be a memory card for those apps which demand it. Samsung’s Super AMOLED is, as usual, mightily impressive.

While the physical design is eye-catching, it’s the speed which really impresses with the Nexus S. When it was confirmed that the smartphone would use the same 1GHz Hummingbird CPU as previous Samsung devices, rather than an all-new dual-core chip, we wondered if Google had pushed the handset out earlier than was advisable. Happily, a few minutes with Android 2.3 Gingerbread is enough to convince us that’s not the case.

Menus, homescreen panes and apps whip about with no delay, and the Nexus S feels leagues ahead of Froyo-based phones even with the same processor. Thankfully not all of the work has been under the hood, however, with a new color scheme and UI making its debut on the Samsung. It’s evolutionary, not revolutionary, but combines to make for a more responsive, usable device. The retro CRT TV animation when you turn the screen off feels a little gimmicky, but the new keyboard and tweaked cut/copy/paste functionality are excellent. The Nexus S lacks a trackball or similar control, but for once that’s no great omission thanks to the improved navigation in Gingerbread. 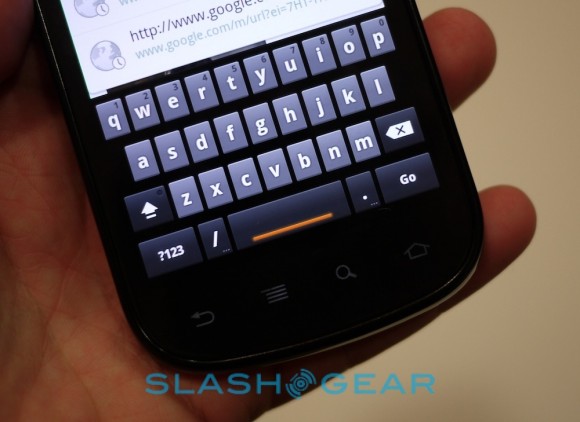 The Nexus S’ NFC is a tricky one to judge at this stage; Google is obviously betting big on the technology, including hard-baked support for the short-range wireless system in Gingerbread and, by putting it into their new flagship, pressuring other Android manufacturers to do the same. Assuming it makes inroads into the mainstream it could well make cardless payments, information transfer and other exchanges far more straightforward, though for the moment it’s likely to be the least-used of the Nexus S’ new features.

What will give the Nexus S its wow-factor to consumers is the sheer turn of speed Gingerbread and Hummingbird achieve together, and by putting the smartphone into retail stores rather than solely selling it online, Google will be well placed to convince customers that Android 2.3 is the way forward. What remains to be seen is how much of a punch existing 1GHz handsets, such as the Nexus One, manage when they get Gingerbread ROM updates. Until then, the Google Nexus S is the slickest Android smartphone around.