The developer conference known as Google I/O that’s going on this week at the Moscone Center in San Francisco, California, is home to several traditions, one of which is now de-coding the official t-shirt given out to all attendees. As it turns out, this year’s shirt is not only super-fashionable, it’s also displaying a bit of actual coding language on the butt. This code runs a string of commands and rules that creates a fun little bit of digital excellence right inside the Google universe, and it’s all so simple.

What you see above and below is the t-shirt as it’s given away to developers and press affiliates at the door. The other shirts have the same design but are different colors like blue and green. The front of the shirt shows a series of widget-like mechanical bits, and the back has a code which can be inserted into the Google I/O Input / Output machine that was revealed several weeks ago in preparation for the convention. 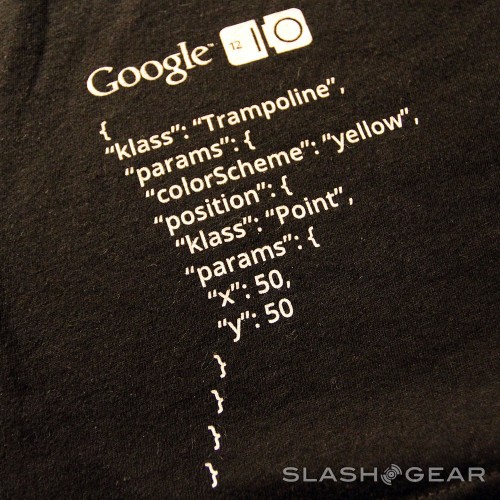 Creating one Yellow Trampoline will set this flat set of lines and levers up in the corner of your screen. From there you can pull the gadget down and move it around until you’re satisfied with its placement, and you can start the launch! Have a peek at our solution here: [SlashGear’s Google I/O T-Shirt Solution] – make a few and bounce away! 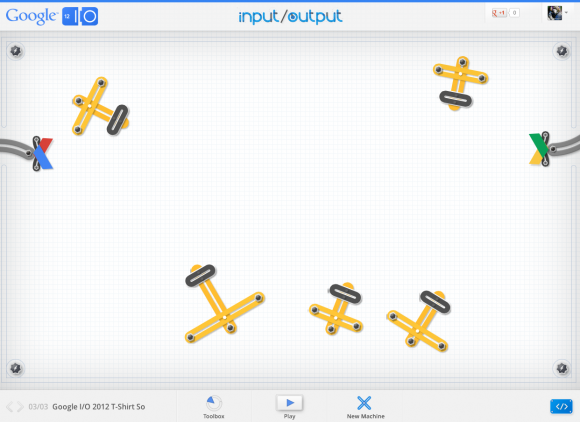 Be sure to stick around the whole week for more Google I/O action as it unfolds across the Google developer universe. Stick to the Android portal for all things Google mobile, too!