Since the first demonstration of the plausible future abilities of Google Glass, instant facial recognition has been one of the most exciting ideas in the pipeline. According the the development group Facial Network, the time for real-time facial recognition through Google Glass is coming a lot sooner than we originally expected. This isn’t an app developed by Google, it’s a 3rd party developer group – they’ve gone and done it first!

What you’ll be seeing here is a very simple demonstration of the Glassware called NameTag. This Glass App is not yet available to the public, but is ready for up-close viewing with Glass – as this demo video shows. This app works with a vast collection of pre-programmed faces and allows you to recognized based on its cloud-based archive.

With NameTag, Glass users will be drawing from an archive that delves into the library of faces from dating networks, the National Sex Offendery Registry, and a set of criminal databases (public, the lot of them, of course). You’ll also see this app recognizing celebrities galore.

NOTE: This app is different from the MedRef solution we saw earlier this year.

“I believe that this will make online dating and offline social interactions much safer and give us a far better understanding of the people around us. It’s much easier to meet interesting new people when we can simply look at someone, see their Facebook, review their LinkedIn page or maybe even see their dating site profile.

Often we were interacting with people blindly or not interacting at all. NameTag on Google Glass can change all that.” – NameTag creator Kevin Alan Tussy

The folks behind NameTag have also suggested that being included in the NameTag archive will be an opt-out sort of situation. Sound like a plan that’ll work right out the gate to you?

“People will soon be able to login to www.NameTag.ws and choose whether or not they want their name and information displayed to others. It’s not about invading anyone’s privacy; it’s about connecting people that want to be connected. 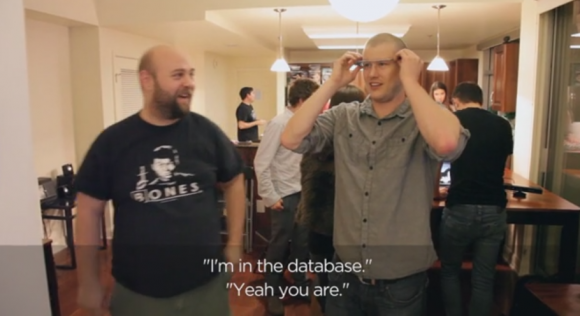 We will even allow users to have one profile that is seen during business hours and another that is only seen in social situations. NameTag can make the big, anonymous world we live in as friendly as a small town.” – NameTag creator Kevin Alan Tussy

Google’s current stance on Facial Recognition Glassware is in flux. They’re in a place where they’re not approving any facial recognition apps until privacy issues have been addressed, but based on what the creators of NameTag suggest, they’ll be pushing – hard – to make Google change its collective mind.