Fungus-grown Hair Ice proves Mother Nature as weird as ever

Get your combs out, because new Swiss research is unraveling the mysteries of what they call “Hair Ice.” This beautiful natural phenomenon grows on the branches of certain types of rotten trees only under some rather specific circumstances, and only in a few places on our planet. Today’s study is only the latest in a line of studies of Hair Ice, the first having taken place back in 1918 by Alfred Wegener, discoverer of palaeomagnetism and originator of the theory of continental drift.

While that German polar researcher’s assistant first identified the Ice Hair as fungus mycelium – closely related to mushrooms – nearly 100 years later we’re to understand one whole heck of a lot more about these oddities. Here in the present, retired Swiss professor Gerhart Wagner continues the research, having studied Hair Ice for decades.

ABOVE: Photos by Gisela Preuß via Brachbach, Germany

Wagner recently dunked Ice Hair-growing wood into hot water, effectively surpressing further growth of Ice Hair. This was the first step in proving Wagner’s theory that the ice grew in such a way due to a the fungus in the wood.

More recent tests done by a research team in Switzerland suggest that winter-active fungus is indeed the source of the ice – or at least the reason it’s able to exist. This fungus is required to be alive with biological activity, they suggest, proving Wegener’s theory all the way back in 1918.

Types of living, fruiting bodies of Ascodiomycota and Basidiomycota were successfully identified on “hair-ice-carrying” wood, while Exidiopsis effusa (Ee) was identified on ALL investigated samples. 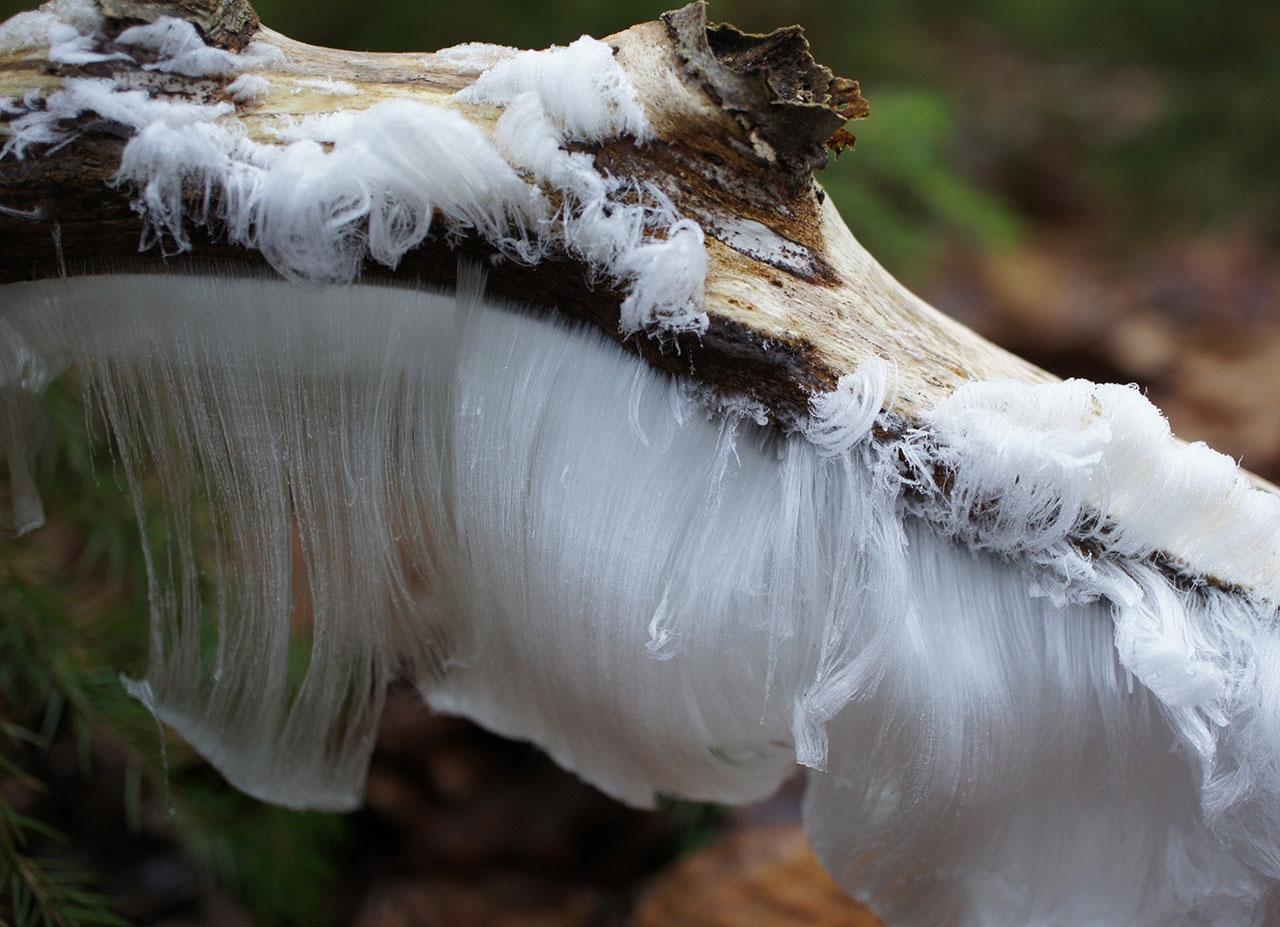 The ice forms at a relatively normal rate – as it normally would when moisture and low temperatures are present, while the fungus “plays the role of shaping the ice hairs and preventing them from recrystallization.” Further work is needed, say the researchers, to identify what it is, exactly, that allows this fungus to inhibit recrystallization.

A removed piece of “Ice Hair”, once melted, reveals the presence of organic matter. Once this Ice Hair melts, it’s not just water.

Fungus, water, and cold temperatures working together to grow their own hair.

You can learn more about Hair Ice in the paper Evidence for biological shaping of hair ice as published by Biogeosciences under code doi:10.5194/bg-12-4261-2015. This paper was authored by D. Hofmann (Institute of Bio- and Geosciences, Forschungszentrum Jülich, Germany), G. Preuß (Wiedtal-Gymnasium, Neustadt (Wied), Germany), and C. Mätzler (Institute of Applied Physics, University of Bern, Switzerland). Images above via Live Science, credit to each individual photographer provided.