We know how it is: you’ve read our review of the Motorola DROID 2 and are suitably convinced by the new Verizon Android smartphone, but you’ve been waiting until the R2-D2 version arrived before putting down your money.  Well, the wait is almost over: Verizon has confirmed that the DROID R2-D2 by Motorola will be available online and in select stores from September 30th.

The DROID 2 itself comes decorated to look like the Astromech Droid from Star Wars, and is packaged in a custom box resembling carbonite.  There’s also a Star Wars media dock and wired stereo headset, together with some exclusive content:

For all this R2-D2 goodness you’ll need to pay $249 (after a $100 mail-in rebate) and sign up to a mandatory two-year voice and data plan.  Otherwise it’s exactly the same phone as the DROID 2. 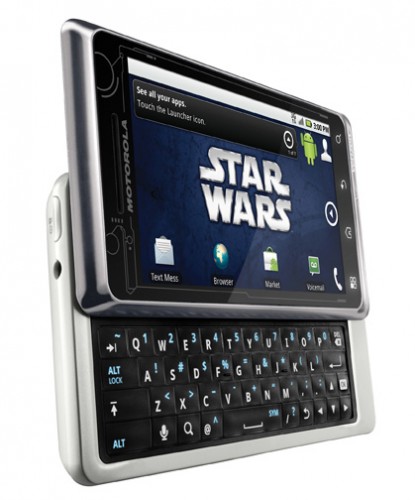 MAY THE DROID BE WITH YOU: LIMITED EDITION DROID™ R2-D2™ BY MOTOROLA LANDS ON VERIZON WIRELESS’ NETWORK

DROID™ R2-D2™ by Motorola Brings the Galactic Empire to Customers

BASKING RIDGE, N.J., and LIBERTYVILLE, Ill. – Verizon Wireless announced that the highly anticipated limited edition DROID™ R2-D2™ by Motorola will be available online at www.verizonwireless.com and in select Verizon Wireless Communication stores beginning Sept. 30. With a graphic design to look like the iconic Astromech Droid from the Star Wars™ Saga, the DROID™ R2-D2™ by Motorola will be packaged in a custom box resembling carbonite and come with a Star Wars media dock and wired stereo headset. Exclusive content comes pre-loaded on the special edition smartphone, including:

· “The Best of R2-D2” video with the original Cantina music

To celebrate 30 years since the film hit theaters, customers with Android devices running Android 2.1 or higher will soon be able to get the Empire Strikes Back app from Android Market™. The app, only for Verizon Wireless customers, allows Jedi Masters to browse, preview and download Star Wars content related to Star Wars: Episode V The Empire Strikes Back. Verizon Wireless customers can access premium Star Wars content for a one-time charge of $2.99.

The Star Wars mobile app will have the following features and content:

· Trivia Challenge: Answer trivia questions about The Empire Strikes Back

The DROID™ R2-D2™ by Motorola will be available for $249 after a $100 mail-in rebate with a new two-year customer agreement. Customers will need to subscribe to a Nationwide Talk plan or a Nationwide Talk & Text plan (beginning at $39.99 monthly access) and an Email and Web for Smartphone plan (beginning at $29.99 for unlimited monthly access). Customers will receive the rebate in the form of a debit card; upon receipt, customers may use the card as cash anywhere debit cards are accepted.

For more information on DROID™ R2-D2™ by Motorola, go to www.droiddoes.com/r2d2.