Can “The Like Machine” take Facebook’s rating success in-store?

The excitement of the retail experience has never quite pushed us to shouting “yes!” in the aisles, but we might be tempted to hit a Facebook-style “Like” button if there was something which particularly caught our eye. That’s what The Like Machine is hoping for, anyway, a button and display that can be clipped to a shelf right in the store, gathering feedback from shoppers and then giving them feedback about what other browsers thought. While it may sound like a social gimmick, it’s actually rolling out in select locations from November.

According to The Like Machine developers TLM Holdings, the idea is to put a gateway to a Facebook or Twitter style recommendations window right out among real-world products.

While online stores have the benefit of crowd feedback – like Amazon’s sales ranking lists – for the most part shoppers at physical retail have had to rely on the salesperson or, in more recent years, whip out their phone to Google a potential purchase. 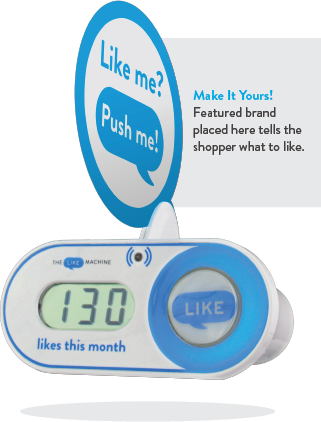 Instead, The Like Machine’s developers are hoping that people will wander the aisles leaving votes with a button press, and that their fellow shoppers will see those votes and use them to make decisions between products.

For retailers, it could be an insight into which products shoppers would like to see more of.

Manufacturers could even use the feedback to decide on how production numbers.

Of course, there are some potential perils to the strategy. Granting a Facebook “Like” to a product or service opens the door to all manner of adverts or promotional content following you around on your browsing; in contrast, there doesn’t appear to be anything in place to temper those who might simply walk around hitting every The Like Machine button they see.

It’s also not hard to imagine kids being drawn to the device. Either way, the metrics may well end up skewed: if everything has hundreds of points, can anything useful be calculated from it?

Right now, the points are limited to The Like Machine devices themselves, but the developers have plans to bridge the physical button with apps and other online services. It’ll begin showing up at retailers in the US from November 1st, with a broader roll-out expected midway through 2015.