ARM Holdings, the folks designing one of the most used CPU architectures in the world, thanks to the ubiquity of mobile devices, is really pushing hard in its thrust to embrace the newest segment of embedded devices to hit the market. That is, wearables, particularly smartwatches, and the myriad smart appliances and gadgets that make up the Internet of Things. Last month, it revealed the new Mali-470 graphics core that promises to give smooth graphics even to small smartwatches. Now it’s announcing the Cortex-A35 that will deliver the processing power for the same.

Until today, ARM’s power efficient CPU needs were met by the Cortex-A53, usually partnered with high-performance CPUs such as the Cortex-A57 and, more recently, the Cortex-A72. With the Cortex-A35, ARM is formally christening an even lower tier when it comes to power consumption, which it dubs the “Ultra-High Efficiency” group, a space formerly filled by the 32-bit Cortex-A7 and Cortex-A5, which are still in wide use today where low-power CPUs are needed. Some of Qualcomm‘s Snapdragon 400, for example, which is used in almost all smartwatches today, are based on the Cortex-A7 (others use Qualcomm’s self-designed Krait cores). 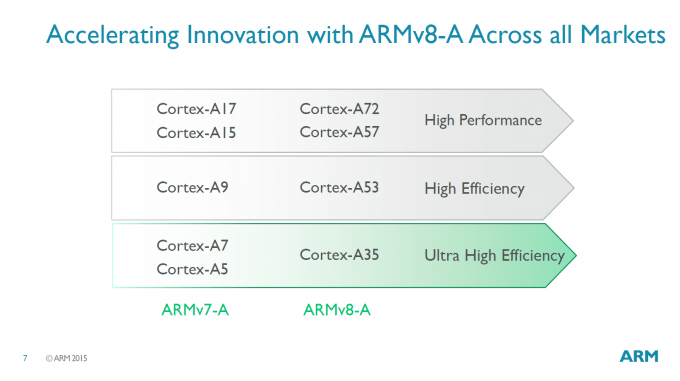 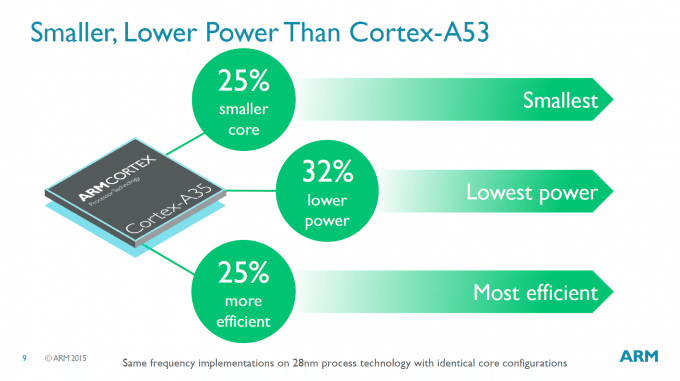 ARM expects that the first Cortex-A35 powered devices will ship around end of 2016. While it also expects that it will power entry level smartphones, it’s not too far-fetched to see it used inside wearables and IoT devices given the lower power consumption and size. In fact, it could very well become the CPU core of choice for wearables, especially when partnered with the Mali-470 graphics core. Although the Cortex-A35 could be used alone, it can also be paired with higher performance cores like the Cortex-A57 and A72. It can even be paired with an slightly more powerful Cortex-A53 if desired. That said, given the advantages across the board, the Cortex-A35 could very well cannibalize and eventually deprecate the Cortex-A53 in most cases.