ARChon runs Android apps on any platform via Chrome browser

So you can officially run four Android apps on Chrome OS, and unofficially a bit more than that. But what if you don’t have a Chromebook or a way to run Chrome OS yourself? Well, now there’s a way for you to run Android apps too in your desktop, depending on the apps you use and your patience.

At the heart of all these is the new Android Runtime for Chrome (ARC) that itself is based on Google’s Native Client (NaCl) feature that allows native code, usually in C or C++, to run be run by the browser with the same security that Chrome offers. NaCl extensions are supposedly cross-platform, meaning that they should work on PC, Mac, and Linux as long as there’s a Chrome web browser around. However, ARC is flagged as for Chrome OS only so it isn’t possible to use the extension on desktop browser versions. That is, until Vladikoff, the same brains behind the chrome-apk tool, got working.

ARChon provides a modified ARC that can be installed as a Chrome browser extension, no matter the platform, making it possible to run any Android app. At least in theory. In practice, it isn’t yet as smooth and as ideal, which isn’t exactly surprising. Android APKs still need to be converted to become a Chrome extension via that aforementioned chrome-apk tool. ARChon, as well as the Android apps, are then treated as extensions and are installed and run as such, which might not be what most end users are familiar with. 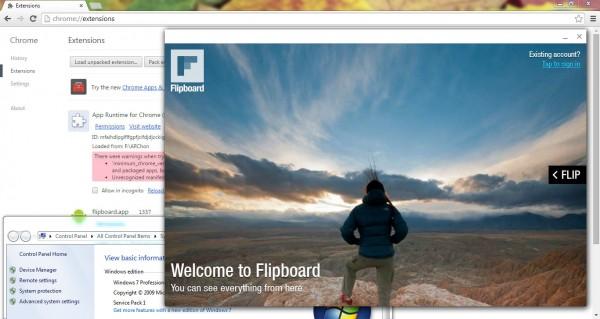 There are also some limitations, most importantly the lack of Google Play Services, which could definitely impede the use of many of the more popular Android apps. Of course, there is also no guarantee of being stable. After all, the official ARC itself is still marked as beta. There is no note if the same four-app limitation on chrome-apk still stands, but we can presume as much since it’s based on the same principles and technology.

ARChon undoubtedly feels like a tentative workaround but is an interesting display of Google’s cross-platform foundations as well as the passion of the Chrome and Android communities. That said, while chrome-apk may someday become redundant when Google fully opens ARC to developers, ARChon might be here to stay. That is, depending on whether Google has any plans of officially bringing the same functionality to its desktop browsers, which it has so far not expressed any interest in.