There’s been all sorts of rumors and speculations and “leaks” pertaining to the supposed release date of Apple’s upcoming Operating System (OS), Snow Leopard, but for one lucky guy, none of that matters. It looks like someone got an early release copy of a Snow Leopard Install Disc with their purchase of a Mac Mini.

There isn’t much to go on here, save for the image that Engadget got via a tipster to their Japanese sister site. The disc has the generic manufacturer information on it, touting a 10.6 Mac OS Version Number, and the standard copyright information. So basically all we can say is “good job” to the lucky shopper, and that you probaby shouldn’t be rushing off to your local electronics store and buying up all the Mac Minis. You probably won’t get so lucky.

So, here’s another shot of the OS, but this time it’s functioning and not wrapped up. Take it for what it’s worth, and drool at the shininess that it is Snow Leopard. Oh, and on August 28th, Apple says it’s coming out. Keep your eyes peeled. 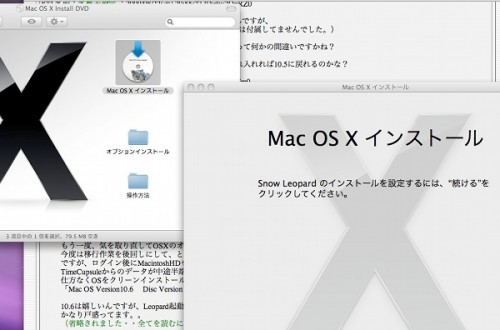