A lot has been made of Apple Watch’s heart rate monitoring of late. While Apple admitted the niche market of wearable owners with dense wrist tattoos won’t be satisfied, we’re still wondering if the actual method used for monitoring your heart rate, photoplethysmography (which nobody should ever try to say) is any good for the rest of us. A new study, which ran Apple Watch in a side-by-side test with a dedicated heart rate monitor, showed the Apple Watch was equally adequate at measuring heart rate.

The device Apple Watch was measured against is the Mio Alpha, which has a 99% EKG accuracy rate. That’s based on a study by San Francisco State University, whose specific purpose was to gauge how accurate Mio Alpha was versus an EKG reading. 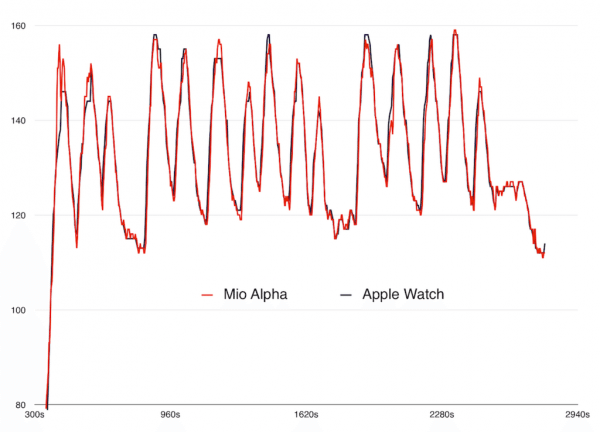 Engineer Brad Larson recently wore an Apple Watch and a Mio Alpha while on a run, then extracted the heart rate data collected on each. You can see the results above.

The Apple Watch didn’t mirror Mio Alpha exactly, but man is it close. Apple Watch gets a touch wonky at higher levels, but we’d consider it a home run for most consumers who want really good heart rate monitoring.

If you need more info on Apple Watch, be sure to read our in-depth review posted earlier this week!