Khalid el-Anany, Egypt’s tourism and antiquities minister, announced last weekend that archaeologists had unearthed dozens of ancient sarcophagi and mummies discovered in a large necropolis south of Cairo. The minister said that there were at least 59 sealed sarcophagi with mummies inside most of them. The mummies were buried inside three wells more than 2600 years ago.

The minister says he considered this the start of a “big discovery,” noting that the area had an unknown number of coffins remaining to be discovered. A news conference announcing the discovery was held at the Step Pyramid of Djoser in Saqqara, where the coffins were found. The coffins were placed on display, and one was opened to show a mummy inside.

Egypt’s Saqqara plateau is home to at least 11 pyramids and hundreds of tombs of ancient officials and other sites ranging from the first dynasty, spanning 2920 BC through 2770 BC, to the Coptic spanning 395 through 642. Along with the sarcophagi and mummies, archaeologists also discovered 28 statues of Ptah-Soker, the necropolis’ main deity. A carved 35-centimeter tall bronze statue of Nefertum featuring precious stones was among artifacts found.

The mummy tomb, which has been sealed for 2500 years, has been opened for the first time. pic.twitter.com/KWGT95girv

On the base of that statue was the name of its owner, Priest Badi-Amun. The Saqqara site is part of the necropolis of the ancient Egyptian capital of Memphis, which includes the iconic Giza Pyramids and several other smaller pyramids. The coffins discovered at the site will join 30 ancient wooden coffins found in October in the southern city of Luxor to be showcased at the Grand Egyptian Museum being built near the Giza Pyramids. 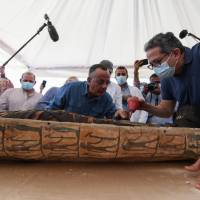 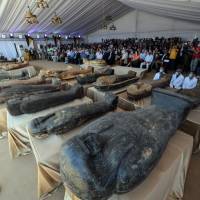 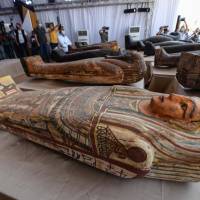 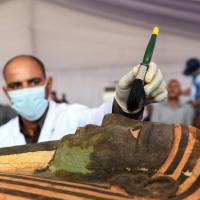 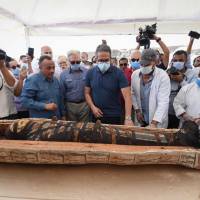 Egypt is building the museum to revive its tourism sector devastated after the 2011 uprising in the country and the coronavirus pandemic. Dr. Mustafa Waziri was the head of the archaeological mission that discovered the sarcophagi.